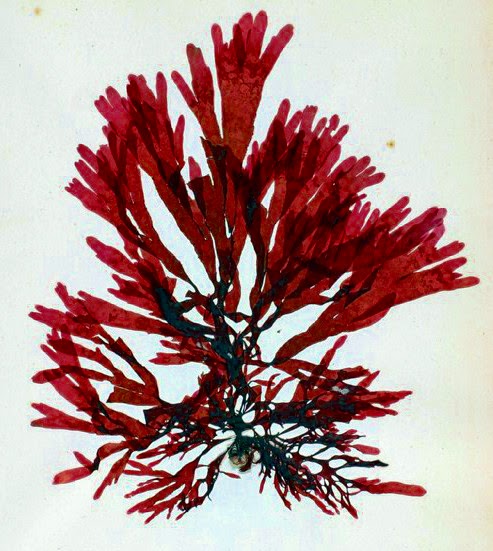 October has been a celebration month for the friends of Adjiumi for the italian forum of perfume lovers is now eight: happy birthday! Go on this way!
One of the good pursuits enlivening the group is to share the most common raw materials in perfumery to smell and understand them better. As I don't feel like turning up at birthday parties empty-handed, I thought it was nice to share with the friends from Adjiumi a mystery raw material to be smelled blind. I simply nicknamed it MPX but finally now I can unveil it.

The raw material X is an incredible top quality red seaweed absolute (palmaria palmata, as shown here on the  left) from Brittany Mane obtains through carbon dioxide supercritical fluid extraction, a precious essence (about 10.000 euro/Kg) still rarely used in perfumery. Undiluted it is such a viscous, complex, brutal raw material that I couldn't help but falling in love with it at first sniff. I hope the Adjiumi crew like it as well and got inspired by it. Judging from the reactions it has rised, surely it didn't left them cold.
﻿﻿
Palmaria palmata grows along the North Atlantic coasts and above all in Finistère, Brittany where it tinges with its ribbons fading from red to pink the coastal areas also knows as près salés, the salt marshes drenched by the high tide. The harves is hand made from June till October when the tide is low. Palmaria or alga dulse also grows along the coasts of Maine and Japan, where it's called daruse.

Since the XVII century british sailors used to chew it as tobacco because they realized it was useful to prevent scurvy. So it slowly became an ingredient in North-Europe and US traditional recipes. Nowadays it's been rediscovered thanks to macrobiotic food but it also winks to contemporary haute cuisine. Moreover its nourishing and revitalizing power is a key ingredient used in skin care lines.
﻿﻿
Recently at Fragranze 12 visiting the installation Unscent - Love Magic Potions created by Mane for Intertrade, I had the chance to smell the red seaweed Cécile Hue carefully mastered to recreate the hyperrealistic salty-bitter humour of love tears. Of course it performs well in brackish accords imparting incredible naturalness. It also possesses though surprising foody aspects so it's no wonder Mane Sud Africa chose it for an olfactory dinner to let the chef Dario D'Angeli make of it a sea-scape of seafood with curry gel, tom yum jelly and pickled mushrooms.
It would also be very interesting for once to relish a salty gourmand, maybe something inspired by eastern food where seaweed is combined with the almost floral smell of basmati rice, the sparkle of ginger and the buttery greeness of avocado for example.

Finally here we go with your impressions my friends from Adjiumi. What a nose! You got all the shades of red seaweed absolute so well, from the salty, herbaceous lichen-like ones to the thick gourmand ones. Bravo!

"It smells of cork drenched in wine and honey mushrooms" [Cristian]

"It's incredible, dry, woody, dark, I don't know how to describe this material but surely it's used in tiny amounts. Tar?" [jordan]

"It attracts and rejects me at the same time. It's a very humid odour, it smells of mushrooms, underbrush, old humid cellar. At the same time I smell something iodate, like being at the sea after a storm with the seaweeds drying in the sun" [lukebs]

"A liquorice aspect rules above all, then I get something woody, musty" [Ele]

"I agree with the other sensations here (cork, dryed mushrooms), but putting it on skin,bam! Salty smell, very iodate with sweet undertones. The smell I get when I open the seaweed packets I use for cooking (dulse, nori, wakame...).
I bet it's seaweed! I can only imagine it inside a marine scent together with citrus and aromatic notes, à la Finisterre..." [Lorenzo]

"It remembers me a tincture of herbs like the ones used in bitters, a dandelion and roots hydroalcoholic infusion" [vanichic]

"At first I got seaweed and then hay. Later I got cork, must and mushrooms... Earth, humus" [Ros Tayeb]

"At first I got liquorice of course. Later on I got honeyed notes, fenugreek and alfalfa. Then it shows the typical smell of cellars with oak barrels and wine. On skin it warms up showing salty iodine notes. A scent that could feature such note?... Diptyque Vinaigre" [Aventus69]
Invia tramite emailPostalo sul blogCondividi su TwitterCondividi su FacebookCondividi su Pinterest