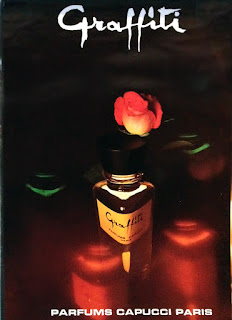 In the early 1960s an up-to-date girl who wanted to dress Italian basically had two coiches: Pucci or Capucci. The hard-liners for kaleidoscopic prints went for the first. The flawless cut junkies simply adored the latter. There's no hesitation about perfume though: Pucci will enter the perfume game a few years later and the only fragrances standing up close to the refined French competitors were the ones coming out of the pleats of High-Fashion signed Roberto Capucci: Graffiti and Parce que.
While making research for my lecture "1937-1963 - The Modern Age of Italian Perfumery" at Esxence 2015, I happened to meet the Master Capucci and we talked about how his first perfumes have born.

RC: I was just arrived in Paris. At that time I was living at the Ritz where you could meet almost everybody in the scene, from the shady-chic Coco Chanel to the young Hubert de Givenchy.

Capucci was already pretty renowned and only a few years before in 1956 Christian Dior spoke about him as "the best Italian fashion designer".

RC: Thanks to my friendship with Jean-Claude, the elder brother of Hubert who was in charge of Givenchy perfumes, I was introduced to the world of perfumery. One day he said to me: "Why don't you make a perfume?". So I thought it was a good moment to complete my fashion with a fragrance, or better with two. Brighter the first, headier the other. The proposals we were working on were different. I had no experience so I was listening to advices, but in the end, as for my fashion, I always chose what I like. I can't act differently.﻿﻿﻿
﻿﻿﻿
I discovered Graffiti, the headier one, thanks to a friend who used to wear it in her 20s. I love green florals and the few information on the web made me even more curious to work out this green enigma. So digging deeper like an Indiana Jones of perfumery, I discovered it was created by one of the young talents of the time at Roure: Michel Hy. In 1963 Monsieur Hy already created Fille d'Eve (1952, with Jacques Bercia) for Nina Ricci and Monsieur de Givenchy (1959) and in a few years he would have signed Y (1964, again with Jacques Bercia) for another young designer, Yves Saint Laurent.﻿﻿
﻿

Topnotes instantly render the seamless texture typical of classic high-perfumery, where the colors are the moist, powdery ones of violet and hyacinth, opposed to the almondy mellowness of hawthorn and pungent thyme redolent of mediterranean backyards hiding an subtle animalic trace. The overall effect is the crisp surface of a Naples yellow silk Georgette floating in the air. Through the green iridescence appears a warmer floral bouquet: the sweetness of rose, a dash of jasmin adding a silky background and the feline jonquil sliding over a smooth embalmed chypre pillow.While the eau de toilette is more about dewy florals and leafy greenery leaving a soapy powderness, the perfume is an intoxicating poison exhalting the fierceness of thyme and the nutty hawthorn. The base gives the illusion of a tremendously ipnotic jonquil with leathery amber facets empowered by the liqueur of musc ambrette which I love to bits.