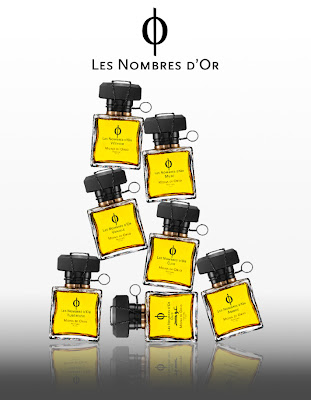 While I was in Rome at Campomarzio 70 in the month of March, I've been unexpectedly surprised by Mona di Orio, very stylish in a little black dress, feathers hairdo and red leather gloves, that led me have an anticipation on her latest compositions. For who likes her style and her compositions, it's not a mystery she likes vetiver. She herself confessed me during the last edition of Pitti Fragranze she was working on a fragrance focused on this particular wood as the leading player, so I was really curious to discover what she would have done after smelling her Cuir where the leather accord is cleverly empowered by a good load of smoky vetiver from Java.
The good thing about Mona is that she loves to impress with her class, with the care for details rather than using coups de théâtre and so she left me astonished when she led me smell, first on paper and then on skin the Vétyver that will join the other three fragrances of the Les Nombres d'Or line.

The fragrance is luminous and classy from top to bottom even if it's a woody themed one thanks also to the choice to work on vetiver burbon, the most classic and beloved one by the great noses from the past and to my nose the most harmonious one with lots of facets, from salty to smoky hints, from the herbaceous to the darkest ground shades. The opening is corroborating with hesperidic notes, above all grapefruit made even more sparkling by spicing it up with fresh blue ginger from Madagascar and making it more penetrating and almost minty with clary sage. The heart becomes warmer and warmer with nutmeg introducing the woody theme of vetiver, supported by cistus labdanum and smoothed by a whiff of graceful tonka bean. The result is a soft wood giving also to my nose a slight floral touch, very elegant and airy.

While facing up the most classic themes in perfumery, I figured out sooner or later there would have been a flower as a part of the golden ratio. I also guessed it woundn't be jasmin as Mona already features one of her most beautiful scents, Oiro ruled by this flower. Nevertheless I didn't expect her to get into tuberose and also in this case in an unexpected way. "When you work on tuberose you can choose two roads: one is the most carnal one like Fracas... I've gone the opposite way making a tuberose for who doesn't like that medicinal side of the flower".
Here is Tubéreuse that's a green and innocent ring-a-ring-a-roses, joyful, saucy and feminine, exactly the opposite of the femme fatale. The opening is citrussy with bergamot and pink berries and herbal thanks to green notes and plays a dewy prelude to indian tuberose absolute, decidedly greener, less nocturnal than tuberose from Grasse so celebrated in Fracas. The flower is smoothed then by a light base with jasmin and benzoin made even gentler and gauzy by a hint of musky woods.
In the second part I'll tell you about the other two fragrances that will join the Les Nombres d'Or line, the Vanille and surprise, even the Oud.
3 commenti
Invia tramite emailPostalo sul blogCondividi su TwitterCondividi su FacebookCondividi su Pinterest