This review is one of my latest contributions to CaFleureBon Modern Masterpieces serie under Michelyn Camen's art direction, so in case you missed it I hope you'll enjoy it.A treasured memory of my childhood is going to the Circus. I remember being both awed and overwelmed by a mixture of feelings, childish anticipation, tears or laughs caused by the poker face of clowns, the breathless suspense of rolling drums while elephants step over a beautiful girl on the ground and my mouth opened in a capital “Oh” looking the acrobats swinging like birds on a trapeze.
Imagine asking a 30 years old perfumer to capture all these feelings as an olfactory briefing in the late ‘90s at the height of the minimal aesthetics. Doesn’t it sound like the recipe for a flop? Fortunately, as Desiderius Erasmus of Rotterdam would say, the best ideas come not from reason, but from a clear, visionary madness. 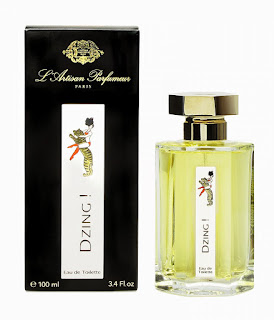 When L’Artisan Parfumeur launched DZING! in 1999 it was called Désir de Cirque. Olivia Giacobetti was the rising star of artistic perfumery which, after a brief passage chez Guerlain (Petit Guerlain together with Jean-Paul Guerlain), signed original creations like the unpaired fig perfection of Philosykos and the muted floral elegance of Hiris. M.me Giacobetti transparent yet playful signature gives with DZING! way to a masterful interpretation of the woody theme by lacing it with leathery, spicy and gourmand facets, playing contrasts with bold raw materials tamed in a dreamlike softness. The fragrance features leather, ginger, tonka bean, musk, white woods, caramel, saffron, toffee, candy apple and cotton candy.

DZING! opens taking no prisoners and you can guess it from the descriptions on the web ranging from scary to merry, from elephant dung to beavers rolled in Chanel No. 5. On my skin the first notes are pure genius: like a clown stumbling and falling face on the ground in a thunderous applause, you instantly get a striking dry sawdust accord mixed with earthy ginger root and a slight turpentine-like radiance which makes it chemically addictive.

Then from oddly plastic it turns to animalic in a cleverly glorious way verging to the floralcy tigerlilies and daffodils possess. Nothing really fecal to my nose, but definitely redolent of a barn with hay populated by elephants, horses, monkeys and big cats.
Later on, DZING! softens more and more on skin showing its tender and most naïve side: It’s not a big three-ring circus but a bohemian one and the sensational opening turns into a contemporary gentle leather larded with medicinal cinnamon and saffron, sweetened by the vaguely gourmand stickiness of benzoin and vanilla. When I tried it, I still remember I kept my fingers crossed (like for the girl under the elephant) it woudn’t crash the magic turning everything into a toothache. Olivia manages to keep it just perfect: you can barely see chirdren holding candy apples, cotton candies and popcorns in the gloom while she’s in the spotlight, diving in the air like a flying trapeze, swinging seamlessly from boldness to transparence, from humor to sensuality, from masculine to feminine like only a master can do.
Dzing! has above average longevity despite its apprearent lightness and surrounds you like a halo everyone will be pleasantly surprised to catch. The sillage is discrete.