Chamade: the heart to love

One must be brave to live a love story. A little bit of inconsciousness is needed and the lightness of a simple heart having the power to shatter all the barriers we put behind ourselves, our family expectations and social conventions.
Smelling it you can guess it's just that rebel simplicity, that lightness that Jean-Paul Guerlain must have had in mind creating Chamade, a modern fruity-oriental perfume inspired and named after a 1965's nover by Françoise Sagan with the same title.

"La Chamade", term used during the napoleonic age to indicate the drum used to call back the host, is about a woman torn among the comforts of the bourgeois life with an older and well-to-do man and the real deep feeling for her true love, a simple penniless artist that loves her for who she is an not for what she represents. 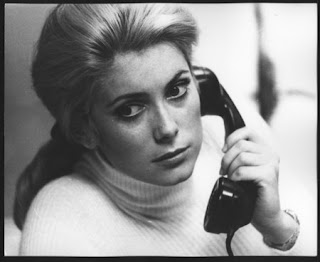 This mad throb of the heart surrending to love rolling like a drunm inspires in 1968 the director Alain Cavalier to translate it into a movie with a stunning Catherine Deneuve (Lucile) in Saint Laurent outfits from tip to toe and undecided whether to choose love or money. In the movie as for the novel the latter will get its way, but in 1969 right after the movie launch that romantic and nonconformistic burst will inspire Guerlain to launch Chamade.

I've always snubbed this Guerlain due to its current reformulation that's quite different from the original above all in the top and heart notes. Anyway, during one of my perfumed wanderings with my friend Gretel destiny gave me a chance to change my mind letting me bump into a bottle of vintage Chamade eau de toilette from the seventies. To be precise I'm speaking about a nice bottle "goutte" or drop-like with the frosted glass stopper "coquillage" shaped like a shell. I saw it and despite I was skeptic I bought it, after all the liquid inside was light and clear and it was worth to risk. Once arrived at home I felt such a great emotion discovering this wonder: the fragrance flooded my nose vibrating like it would have been made yesterday.

The opening was perfect despite its forty years, still with a luminous and lively bergamot moving fast to the galbanum green sauciness. In this grassy and moist flowerbed blooms the charming hyacinth with its sappy, floral and fleshy corollas. All is made even more juicy by a masferful load of a red fruits (blackberry and redcurrant) and leaves slightly sharp accord. This is maybe the only facet still present as it was in the current version that turns this awakening into a verdant garden into an aldehydic and soapy sent-bon. 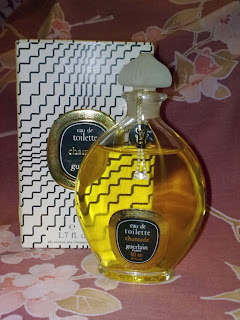 The heart of the perfume starts from the ripe tone of the red fruits to introduce its romantic side making the green initial thrill melt into an embrace loaded with turkish rose and warmed by the powdery facets of jasmin and ylang ylang. This is the drum beating and resonating with true passion. Unfortunately also here the current version smells more like the older and rich man of the nover: gentle and boring with its detergent and bourgeois aura good for everything but to thrill.
The fragrance starts to reveal in the basenotes the signature style of the classic Guerlains like Après l'Ondée becoming more and more subtle and mellow like an invitation whispered in your ear: Mysore sandalwood reminds the initial greeness thanks to a damp shade of burbon vetiver but becomes later milky on the bed of the renowned guerlinade. Despite it is decidedly more suitable to female skin where the rose shines, together with the opening on me the base is the most intriguing part that lasts for at least for hours lingering the skin with its vanillic hints and its particular ambery and powdery touch in an intimate dimension like a love made of little cares rather than dramatic gestures.
Invia tramite emailPostalo sul blogCondividi su TwitterCondividi su FacebookCondividi su Pinterest