"Listen. It rains
from the clouds scattered.
It rains on the tamarisks
brackish and burnt"
G. D'Annunzio - The rain in the pinewood 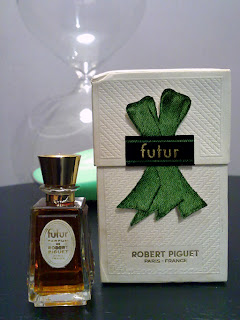 Speaking about vintage perfumes it is sometimes surprising how it happens us to find unexpected treasures, as they were waiting for us there, dozing in a shop or among the webpages, just like someone that while walking runs into a greek amphore. So it happened to me and Nyneve while surfing the net to run into this very rare vintage perfume. Luckily it was also perfectly preserved in its modern greeness.
Futur was created in 1967 by Maison Robert Piguet while trying to relaunch the brand that was suffering in decadence given also the unfortunate launch of Cravache in 1963 and was later discontinued in 1974. For sure the poor success of the fragrances was due also by the decision of the coutourier to close his shops in 1951 few years before his death in 1953. Cravache, a masculine fougère with a classic structure though survived for long time while Futur with its smooth but unsweet base was probably too ahead to be understood by women at that time.

The period is the one of space age where dresses as well as desigh are ruled by neat geometric shapes like Eero Aarnio's  Ball-chair and by new generation plastic materials. Women together with Vidal Sassoon cuts à la garçonne, re-discover their independence and claim for parity with men: we're one step from the feminist demonstrations and even in perfumes herbs and woods bring them back to a unisex vibe.
Of course Futur sniffed by a nowadays nose doesn't hit the nail on the head giving an aroma all but futurist. Despite it brings some elements of its time like the green notes and hyacinth opening, surely in 1967 it must have sounded contemporary yet classic anyway thanks to small angular details emerging from a smooth and glossy surface, so contemporary to have been probably misunderstood as nowadays it could be sold tout court as a niche masculine fragrance. 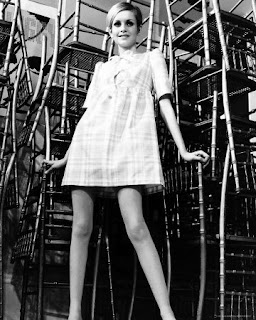 The perfume starts with the sharp greeness of galbanum essential oil  softened by a bergamot touch but immediately made more intense by an aromatic bouquet where you can pick the almost floral radiance of bay but also the bitterness of rosemary and thyme so intense to recall me for a while the opening of Chamade which has been layered by mistake with Serge Lutens Chêne. Just the typical touch of hyacinth lets see through a sketch of lean femininity like Twiggy's androginous silhouette.
Slowly the aromatic accord leaves just a trace melting into the floral heart of the perfume with a soft jasmine refreshed by a tiny bit of May rose, but everything is just whispered.
The dramatic moment comes in the end where the basso continuo of the rough vetiver-patchouli accord grows with a high voice recalling the green palette of the opening with a pinch of garbanum resinoid, darker and humid. Finally a powdery base with animal and leathery hints amphasizes even more the earthy, almost saltish facets of vetyveril acetate maybe used to give the idea of coastal vegetation, of tamarix flower from which the scent takes inspiration.

﻿
﻿By chance some time ago another dear friend, Woody Freak gave me a small sample also of the vintage eau de toilette version so I could compare the two concentrations and put them side by side with the current eau de parfum concocted by Aurelien Guichard of Givaudan.
In the eau de toilette everything's obviously more luminous, specially in the drydown where woods are just a hint even if there are still shy the bitterness of thyme and the salty mood of the base. The current eau de parfum tries without succeding to recreate the lines of the eau de toilette more than the ones of the parfum. Pity that Monsieur Guichard chose to smooth down every interesting note in the opening preferring hyacinth and safer foliage triplal-like to the temper of the original aromatic bouquet. Finally it's a real pity for the drydown that could have been the good occasion to bring back to life all the modernity of this vetyver-themed juice so charming that I know many gentlemen that could go crazy for it. Instead they preferred to stay safe with a nice musky base and dry cedary hints, conforting for sure but miles away from that brackish breeze blowing through the blooming tamarisks.
Invia tramite emailPostalo sul blogCondividi su TwitterCondividi su FacebookCondividi su Pinterest

I agree with you 100% about the base - could be more interesting. That said, it is fantastic that you can find those vintage fragrances untouched and preserved! I never did...
Even funnier i to write about a fragrance called Futur, that is in fact, a vintage. Like watching movies or reading books when future was the year 2000!!!
bacci Simone

Welcome back Simone,
I agree, it's so difficult to find well preserved vintages and among many bad ones sometimes a good one arrives. That's funny indeed the "back to the future" idea, as funny as some space age design pieces :)

I've finally decided to try my sample of the current Futur. I cannot comparer it to the vintage version, which i imagine to be much better and richer than the current one, but so far i found the current Futur a very good fragrance, not sensational, but very good. On my skin i see that Aurelien tried to recreate the green accord using an intense orange flower accord paired with something slightly aldeidic and a clean green note. This combination made its first minutes very retro, a green flowery accord with something soapy and sharp. Then on me after some minutes the bushy aspect of orange flower takes place and it's accompanied with a shy but noticeable mossy accord. I can get the vetiver on the base, it's more leafy than woody and leathery, it's a discreet vetiver aroma. I see that for a while this is what is the future of green chypre fragrances, with the notes there but very delicate, with the intensity only taking the first minutes of the evolution. I'd love if it was more fullbodied, but the way it is it's an unusual summer fragrance...

Hi Rick,
nice to hear you liked the current Futur. To my nose it's not a bad scent nowadays but I had the chance to smell the vintage edt and perfume and this is closer to the edt indeed. Brighter, specially for the topnotes and it's pleasant for the summer, yes. I only complain about the base: too much of clean musks, almost no vetyver and a dull woody palisandrol note compared to the sharp, earthy vetyver of the original. C'mon this si Piguet, all his scents were edgy, Guichard should have dared a lil bit more :)