"A safe, still night; too serene for the companionship of fear" - Jane Eyre, Charlotte Brontë

When I heard the next creation of Isabelle Doyen for Annick Goutal would have named Nuit Etoilée, starry night, I instantly thought to the colour blue, to the blue shades that go round in whirls also in the famous Van Gogh's painting. Not a deep blue but a blue lighted by the golden stars. In fact this is the beautiful shade  they call clair de lune, moonlight blue that's been used to dress up the classic male and female flacons together with their ribbons and labels for this eau de toilette. Surprisingly the fragrance it's more about the earth rather than the sky, more about what's under our feet rather than what's over our heads, it's more green than blue. The inspiration is about a walk through the pine woods as the night falls. Let's walk through pebble paths trampling on pinecones, picking sprigs here and there and letting the fir balsam dirt our fingers. As we arrive in a glade, we lay on the ground, breathing the smell of soil and looking at the sky letting the serenity of this greet stainless spaces let in. 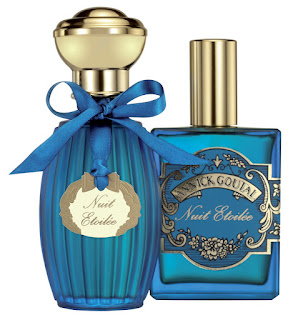 After launching Mon Parfum Chéri, I think it's a bold choice to make an eau de toilette featuring fir balsam as the main ingredient. It often connotes so much a composition that's easy to fall into the pine cough drops or the room scent effect. Fortunately here a very pleasant citrus-aromatic armony prevents it. Cedar, but above all the fruity touch of sweet orange soften the seventies style austerity of siberian pine needles, giving it a twist as lively and comforting as the last sunset flashes. What I particularly liked about thi scent though is the heart coupling cold pungency of peppermint with musky angelica projecting its spicy touch on the conifers. For a while I had an olfactory flashback about how glorious was the angelica-pine needles accord in Yatagan by Caron that's almost disappeared in the current formulation but it used to be its soul back in time. In Nuit Etoilée this aspect is far more subtle and sweetened by a floral jasmine trace and I confess I wish it would have been sharper and longlasting, maybe coupled with other wild musky-aromatic herbs like caraway.

The base of the fragrance is ruled by fir balsam with its ambery yet fruity tones that conjured up in my mind pine-seeds I love. Here cedarwood pushes it closer to pinecones and pine bark resinous pieces keeping it airy by the minty coolness. Just a touch of tonka bean smooths down the woody-balsamic accord with a hint of pine-seed. After a couple of hours I could smell on my skin the resinous halo wrapping up dry cedarwood and immortelle giving it a neochypre herbaceous vibe. Again here I had another olfactory parallelism with Serge Lutens Chêne, where the beeswax has been replaced with fir balsam. The result is a pleasant and quite juice with good lasting power. The opening has a good sillate too. Pity that the drydown has a dull projection. If only it would have been as strong and textured as the Lutens, with a slight whiff of moist soil and pebbles, it could have turned into another really intense picture. Who knows if Camille Goutal and Isabelle Doyen will listen to my request and take the chance to dare with the depth of a Nuit Etoilée eau de parfum.
Invia tramite emailPostalo sul blogCondividi su TwitterCondividi su FacebookCondividi su Pinterest

Your review gives me a hope that I might like the perfume. I want to sooo much! (I like the bottle itself - but not enough to buy a perfume just for it)

I wish though they would have released it last December: I had a craving for the fir/pine perfume. I even got some Jo Malone'e room spray and tried to use it as a perfume.

Hi Undina,
indeed the bottle colour is stunning isn't it?
About the perfume I think it'll be perfect for the warm climate too with the balsamic coolness. After all you can try it in the next months and see in which climate it works at its best no? :)