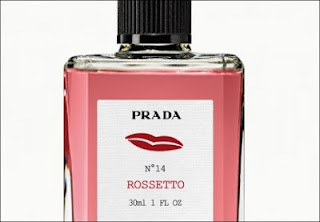 A few weeks ago I had the pleasure to take part to the last lecture organized by the Smell Festival in Bologna about Maîtresse Parfumeuse, basically three events about perfumery in pink dedicated to Germaine Cellier, Sophia Grojsman and Daniela Andrier. Madame Andrier never got me keen on her creations, that's why I told myself that maybe, looking at her through Francesca Faruolo's eyes, I would have been at least about to know her work better if not to love it. What really amazed me is her latest creation for the Prada exclusive line, the No. 14: Rossetto.

An easy equation could make you guess Daniela (Roche) Andrier's success is partially due to the fact she's married to Gilles Andrier, the Givaudan CEO. It wold be biased though not to consider she's been able to find her own olfactive signature made of modern rigour without falling into the plain conceptual minimal. Even for the exclusive Prada line she's been able to use top quality raw materials winking to the classics while preventing from too obvious nostalgia. What always prevented me from completely like her job is maybe a sense of extremely pragmatic composition, a kind of dull wittedness I get in most of her works. Things are never too much or out of place, everything is practical a bit like in the late functionalist italian architecture, almost predictable. This aspect in my mind also put her style quite far from the Prada style which of course features a pragmatic dress but debunks it with camp elements like a showy wrong accessory or a wrong color match or improbable prints. Sometimes also together.

Smelling Rossetto for the first time I felt something. It made me think to Mrs. Andrier as the Garbo of Ninocka where after having success with some dramas, they joked about the fact that "Garbo laughs!". The fragrance itself is not an absolute masterpiece but it possesses a new element compared with the past: I find here that unconventional fun Miuccia shows in pairing improbable shoes even with the most classic outfit.
First of all the name: an intruder object in a collection dedicated to olfactory notes like Iris, Garofano (carnation) and Opoponax. Second the non original theme: lipstick, fetish element of the feminine makeup that already ispired fragrances like Moulin Rouge by Histoires de Parfums and even before Frédéric Malle's Lipstick Rose created by Ralf Schwieger. Third the fragrance almost clumsily named rossetto that actually is just an excuse to give an exquisite interpretation of the rose like a Lolita, a crushed rose in her hair, chewing gum and a blurred lipstick. Forth the institutional packaging getting jolly thanks to that ruby red lips stamp. It's not by chance on February 14th, Valentine day, Prada launched an application linked to Rossetto that allowa to create your own personal artwork featuring the lips leit-motiv. For the high-tech fashionistas here it is.

If you're going to expect the typical greasy violet-tinged smell, rossetto will immediately wrongfoot you with a rosy, crisp, almost green opening where violet is just a hint to go gladly towards red berries rather than violet petals. Slowly the fruity facet grows blooming into a juicy white peach emphasized by the almost edible almondy counterpoint of heliotrope. These aspects get it a little bit close to Mona di Orio's Rose Etoile d'Hollande, despite later the fragrances take two completely different roads. After a fair clove spiciness in the heart, indeed Rossetto becomes far less ambery and only in the end it shows more the lactonic, polished aspect of the glossy and yummy texture of a modern lipgloss rather than the realistic retro smell of old rancid lipsticks. Of course Rossetto is creep as much as needed but this time we're far from both the pragmatism of Infusion d'Iris and Infusion de Rose and the monody for icing sugar in Candy and smelling it gives me such an optimistic rush that nothing from Madame Andrier gave me before.