September 1945, the scars of WWI are still fresh in Parigi. At the subway Étoile Platform a man comes close to Yuri Gutsatz: "Don't you know me? I am Jean Carles. Are you looking for a job?". Even if you've never heard before about Yuri Gutsatz, I think this anecdote is enough to let you understand we're talking about a great guy of perfumery with an adventurous life, but above all who left us a great lesson about perfumery as an art.
After that meeting, Yuri Gutsatz will work at Givaudan (Roure Bertrand Fils et Justin Dupont back in time) for more than thirty years and later in 1975 will enstablish Le Jardin Retrouvé, the first independent niche perfume house right before Jean Laporte would follow his example with L'Artisan Parfumeur.


While the new business model of perfume as a test panel and marketing driven mass product was imposing, Monsieur Gutsatz reaffirmed with Le Jardin Retrouvé the full dignity of the perfumer as a creator and of perfumery as an art.
In this sense. his masterpiece has been the Osmothèque Versailles, the first and foremost perfume museum founded together with other nine Master Perfumers like Jean Paul Guerlain, Jean Kerléo and Jean Claude Ellena to preserve olfactory art in its original form. In particular I like to remember it's thants to the work of Yuri Gutsatz we nowadays can talk about Paul Poiret and Parfum de Rosine non only as a bunch of silent beautiful glasses.

In 2016 Yuri's son Michel Gutsatz decided to relaunch the brand in full compliance with its DNA. Seven of the thirty original fragrances have been reformulated by a team of perfumers to match the current IFRA regulations without dimming their beauty. And since perfumery is a family affair, artist Clara Feder, wife of Michel took care of the repackaging that now spots colorful graphics perfect to suggest the juices wide range of sensations. The fragrances can be bought via Le Jardin Retrouvé website only, reducing this way other costs than the essential ones. 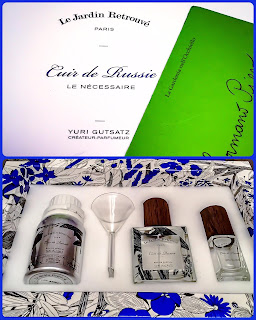 Michel was so kind to send me the sample set (you can order it online, but you can get them for free too by subscribing to their Perfume Lovers Club) together with a nice handwritten letter. I's touth to pick one as they are all nonchalant beauties. The timeless elegance of the line, the brightness and balance of such multifaceted fragrances are a shot of life in a stale scenario full of loud, monolitic launches.

My favorites are pretty opposites (ah, the dual edge of gemini!): Citron Boboli o Cuir de Russie, now which one to go for? Citron Boboli brings me to a lemon house where they just got the trees in for the winter and yet they still smell of sun, soil and warm spices. But how to resist to the fetish pleasure of leather?

In the end I went for Le Necessaire resourcable kit of Cuir de Russie, the last perfume Yuri Gutsatz created in 1987 to complete his fragrant garden.
Cuir de Russie honors all the promises in its name: there's Paris right after WWI, it's winter and the snow whitens the roofs bringing a touch of Russian nostalgia to the expats like Yuri Gutsatz. There are the Ballets Russes echoing under the arcades of the Théâtre du Châtelet. In fact the fragrance opens with a violet as androgynous and exuberant as Nijinsky, bistred faunus in smoke-black and cade dancing on the notes of Debussy. The breath of this mythical creature smells of skin and wind, of violet leaves and tobacco. His path is brightened by a ray of ylang ylang and paved with a beautiful oakmoss velvet, slightly dusted with cinnamon and clove redolent of the great chypre masterpieces Diaghilev used to wear.
This winter surely it will make me good company while wearing leather gloves and boots like an Imperial Guard!