Esxence is always a blast of new brands and new launches making the four days somehow a sniffathon even for the most experienced or jaded journalist. The Garden of Eden it’s been my seventh edition over nine and what strikes me out is the more time passes, the more what I enjoy is the time I can spend talking to people, learning from the conferences and enjoying scents and fun at parties.
As for parties the Oscar goes this year to the Xerjioff Party at Palazzo Visconti. The atmosphere was incredible, with people enjoying beautiful music, entertainers in costume, wine and delicious finger food but above all the amazing decorations of the salons where Giuseppe Visconti, the eccentric founder of Gi.Vi.Emme perfumes (that gave birth to contemporary Italian perfumery), and his son the director Luchino grew up. Thank you Sergio Momo for this great opportunity to see hardly accessible spaces connecting with perfume, history and beauty.

If the garden of Eden this year had a tiny space for lunch (no tables, only standing!) at The Mall at least the organizers made up for this with The Garden of Eden Party at Spazio Gessi. Stained steel, glass walls and water showers and falls were amazing letting people play with their floral attire in a cyber-garden ‘90s disco atmosphere. Music also was amazing and it was nice to have some fun also with fellow Cafleurebon editor Lauryn Beer which I had never met before.

As for conferences, the most awaited for me surely was Christophe Laudamiel’s Manifesto. It was amazing listed to Christophe breaking down prejudices, specially about synthetics. His olfactory games using synthetics to conjure up many facets, letting people understand the many possibilities art-ificial raw materials add to the natural palette literally charmed the audience. Also the following discussion conducted by Sarah Colton (so much fun sniffing around with you bad girl!) and Karen Marin (Parfums Givenchy) was engaging and many people in the industry gave their experience on spreading perfume culture and the benefits of it in many fields from commerce to medical therapy.

As for new launches, booths have grown so much I think it’s impossible to visit all of them even in four days, so I hope people I missed won’t take it bad. I’m sure we’ll have more chances in the future. If the green trend has come to maturity with a mint boom, the bourgeoning trend for florals explored osmanthus and magnolia in many ways. What will be wearing so this summer? Let's start with the three best launches to which I will add my personal selection of "must smell" from the show in the next posts. 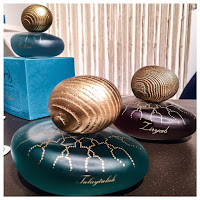 Majda Bekkali
After exploring Toledo with the almondy sweetness of orange blosson in Tuhlajtulah, Majda Bekkali completes her andalusian collection with two new addition: Mudejar and Ziryab. Inspired by light playing through the Moors elaborate architecture, the first is a modern citrus chypre combining lively grapefruit to the savoury African stone. It’s in the latter though, a true gem, that Robertet rising star perfumer Richard Ibanez blends a rich oud woody base together with the most exquisite green floral sap of tulips symbolizing the long lost genius of Ziryab who gave birth to flamenco. 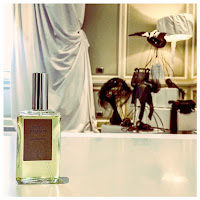 Naomi Goodsir
The lift doors open at the Principe di Savoia Hotel 7th floor. Early in the morning I guess I was the first to enter “Insomnia”, Naomi Goodsir installation featuring Parisian artist Tzuri Gueta green silicon roots. Everything is rolled in immaculate sheets like in White Nights. Too much adrenaline can do that, and that’s exactly what I felt getting to my nose Nuit de Bakelite. Like a bug, Perfumer Isabelle Doyen slips into the plastic, unopened blossoms of a tuberose stem to extract this fierce, galbanum laden obsessive green. Outstanding. 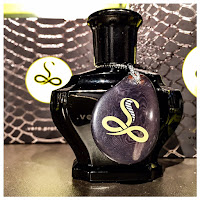 Vero.Profumo
Vero Kern celebrates ten years of fearless creativity, unashamed beauty and emotion in perfumery releasing Naja, the Jubilee tobacco scent She still surprised me in many ways. Naja, the serpent-perfume touches me, it hugs me it’s around my neck and it’s totally addictive. Inspired by shamanic powers of tobacco and the symbolic energy of the cobra, this beautifully odd tobacco loaded with linden blossom and leathery osmanthus is like an uplifting therapy, and I guess people feel that because I had so many compliments while wearing it at the Esxence party.