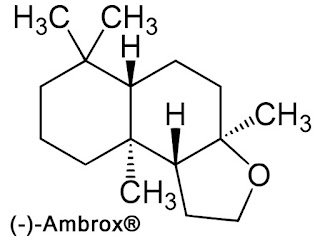 After more than a month after Esxence, smelling the blotter drenched in ambergris tincture it's easy to understand its use as a fixative: the aroma is still there, now delicate and powdery yet tenacious and diffusive. While during the lecture of the Osmothèque the main detectable aspect was about animals, stable, horses, manure and hay typical of ambrinol, ambergris slowly softens revealing its unique bouquet with more than 100 components, some of which in faint traces. Given the cost of the natural raw material, since the '30s Firmenich started searching for possible sinthetic replacers. Nevertheless it was only during the '50s that appeared Fixateur 404, a compound partially made of ambrox and ambrinol. Like ambrox, also ambroxan is derived from the sclareol present is clary sage, but it mainly captures the woody, earthy, balsamic and almost incensey aspect of the natural material without the animalic, marine and iris-like mellowness. Nothing can really replace such a mystical yet carnal raw material which smell joins the fumes of high mass in a cathedral to the warmth of a throbbing naked body and an olfactory crossbreed of algae, iris and violets speaking of wind, earth and sea.

Despite the increasing presence of the word ambergris in the declared olfactory pyramids and in the marketing tales, unfortunately nowadays perfumers use one hundred less the amount they used ten years ago and it is doomed to be less and less. Of course the main reason is the cut on the budget for the juice sometimes fallen below the threshold of decency. The second reason is the demonization of animal raw materials that took place during the last ten years. This campaign mining a precious heritage in perfumery has never been so wrong specially for ambergris that totally respects the animal and the nature. In fact keeping oceans clean would make sperm whales live better and would ease finding high quality ambergris blocks.

In the fragrances that the Osmothèque Versailles led us smell, ambergris shows to be versatile making flowers like the avantgarde lily of the valley in Houbigant's Quelque Fleurs more lively, or lighting up the golden base of fougères like Jicky. But above all it's ambers and chypres that gain that raw sensuality together with the lightness of its salty bite.
You can feel it in Mitsouko contrasting and exalting the peachy softness over a woody base. Again you can feel the physical effect ambergris has on perfumes both in Shocking by Schiaparelli and in Chypre de Coty where Jean Carles beloved patchouli becomes a steamy cloud exalting the ink-like, tasty facets of oakmoss. By the way, who doesn't know the story about how Guy Robert got the idea of pushing more and more this effect starting from Miss Dior to generate the refined and barbarian Dioressence?
﻿﻿
Maybe orientals are the most expected context for its fecal and balsamic notes and yet it adds lift, taming the sweetness but not the depth thanks to the magic of the sea like it happens in the exquisite Jean Laporte Ambre Precieux. In L'Heure Bleue this animalic beat gives more drama to its famous encaustic note while the tasty contrast it plays with the mexican vanilla Coty put in Emeraude makes it almost edible. Back to our days ruled by synthetic replacers, you can still feel its savoury bite for example in Patricia de Nicolaï Le Rivage des Syrtes (MDCI) exotic breeze or in the erotic high-voltage elegance of Danger pour homme by Roja Dove. In a few words, pourring ambergris into an ambery accord is like making a tarte tatin with demi sel butter instead of regular butter: it's simply mouthwatering!