"Fine ladies and gentlemen should regale themselves with an essence found in the inglorious bowels of a sick whale" Moby-Dick - Herman Melville
As usual, the Osmothèque with its lectures is one of the presences it's worth waiting for at Esxence. Moreover this year they fulfilled one of my big wishes (and I didn't even had to ask for it) bringing to Milan the monographic lecture about animal raw materials in perfumery that I missed the last year in Versailles and that they are going to repeat on May 14th.
Raw materials coming from animals have been used for centuries in traditional perfumery both as a fixative and also because of their particular vibrating and evocative notes that speak to us in their atavic and mysterious voice. It would be difficult trying to resume in a single post Bernard Bourgeois brilliant speech about ambergris, deer musk, castoreum and civet. As besides the beautiful materials and creations the Osmothèque led us smell I also recently had the chance to smell old and new perfumes containing ambergris, I want to tell you more about this fascinating material which millenary usage is lost in the myth: the floating gold.
﻿﻿﻿
Irony of nature: for centuries alchemists have been working themselves to death at trying to turn poor materials into gold without realizing that's actually what the sperm whale (Physeter Macrocephalus) does. For long time there were myths and odd theories about the origin of ambergris: for Avicenna it came from a submarine source while at the court of Louis XV it was considered a kind of seafoam. Nowadays we know it is produced by this mammal. When the sperm whale swallows some fish, it happens its stomach walls get hurt by squid beaks. A cicatrizing substance comes out from these wounds and wraps up the beaks and part of the digested fish in a bolus that's discharged then. This indigestible bite floats for years on the water and matures under the sun, rocked by the waves and the wind. What reaches the shore is a precious solid gray mass. Unfortunately nowadays pollution makes harder and harder to find some and even more to find good quality blocks. Just think the poor sperm whales often get hurt by swallowing plastic bottles instead of squid beaks.  The majority of ambergris comes from the coasts of Antarctica, Australia and along the indian ocean. Give the ratings (12.000 euro/Kg), if you ever pass by that places it's worth paying attention while you walk by the shore and in case you're very lucky, you can always have a quotation of your treasure here.

Once dried, ambergris is crushed and put in alcolic tincture at 3-5%. The longer it soaks (6 months minimum), the better the olfactory quality of the tincture is. Its aroma is complex, marine and animalic, woody and balsamic, honeyed and tobaccoish with leathery hints and has an exceptional lasting power which makes ii a very good fixative too. It can be easily detected smelling it because it joins an animal side with the seabreeze giving that irresistible smell like tanned skin right after the beach. Sometimes one aspect dominates, sometimes the other. For example just smelling No. 5 in its original formula you can guess Ernest Beaux favourite is the one landing more to the light, marine, almost floral side. Wearing vintage Shalimar instead, you can feel beating a very sensual vanilla accord revealing Jacques Guerlain's love for the more fecal and almos leathery ambergris quality. 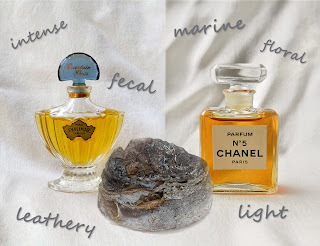