thrill [θrɪl]: n. a sudden sensation of excitement and pleasure | a situation producing such a sensation. 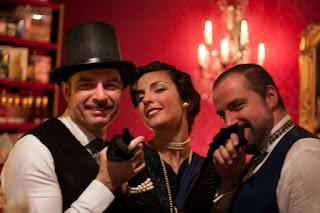 Excitement and pleasure didn't miss at Boudoir 36 in Catania during "Verres et Flacons", a beautiful evening accompanied by the jazz echoing in via Santa Filomena and inviting to get loose as a goose like in the roaring years. It's always a pleasure to brainstorm with Antonio, he's very helpful and being on the same wavelength has allowed us to do another event dedicated to taste and smell, this time with a chic touch more. Thank you! We had a lot of fun together with the paintress Bruna Caniglia playing with us as a second Tamara de Lempicka welcoming the guests amazed by this jump to Paris in 1930, at the first bar de parfums in history.


There were all the right ingredients to get spoiled. Good music? Check. Beauty? Check. A refined touch of elegance? Check. Of course there were perfumes and cocktails to delight the senses. The tasting path passes through four fragrances from different creators inspired by alcoholic drinks. It's with the same "spirit" that we translated them into cocktails to let them flow down the throat and rise back to the nose in a mirror for aromas. 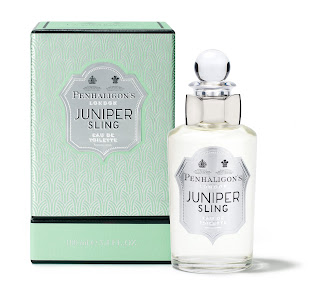 Energizing start with Penhaligon's Juniper sling which has been particularly appreciated in the heat for the stinging blow of pink and black pepper and juniper berries Olivier Cresp used to give the iced sparkle of a London Dry Gin based cocktail.
Created as a remedy by the dutch physician  Franciscus Sylvius infusing juniper and aromatic herbs in distilled malt spirit, gin spread in the United Kingdom thanks to William of Orange who forbidden to import spirits, above all french cognac. It's funny thinking to the chilly mannered William displaying his disappointment at knowing the tasting features also alcohol labelled under the Frapin brand, isn't it? Back to Juniper Sling, the obvious match seemed to be lots of ice and a good pink pepper flavoured Gin Tonic with its freshness fading into the peppery herbal aftertaste. What's amazing getting back to the fragrance, was the spicy balsamic seesaw running in opposite order in the fragrance and the cocktail in a sort of loop.


The second tasting is a slap in your face but with a soft leather glove: De Bachmakov, a tribute Céline Ellena gives to the russian origin of Thierry De Baschmakoff, founder of The Different Company together with Jean-Claude Ellena. Main theme of the fragrance is the clear air of an imaginary muscovite spring, with the roughness of vodka and the aromatic green of coriander and shiso, a variety of japanese basil with minty, tea-like astringent notes and the spiciness of caraway. Trying to recreate these sensations in a cocktail, we dipped fresh peppermint and coriander in vodka spotted with a dash of gin to give the balsamic vibe of cedarwood at the base of the perfume. Among connoisseurs, some liked its dry taste enhanced by hawaiian red salt on the edge of the glass. From one hand this cancels the "potato peel" effect of vodka but it also renders on the tip of the tongue the salty and toasted aspects of the drydown. Smelling again De Bachmakov coupled wth the sensations from the cocktail gives you a wider impression, like seen through a fisheye capturing the thousand shades filling the blanks in a minimal formula that's also extremely refined and deeply evocatory. 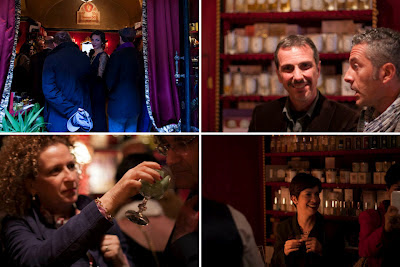 From the dry wind of Russia we directly float on a bed of cognac to France under the Sun King. Created as an absolue de parfum under the name "Les ailes du desir" as a tribute to Wenders movie "Wings of Desire" and to the human sensuousness, Frapin 1697 has been later dedicated to the year Pierre Frapin was appointed "Apothicaire du Roi" by Louis XIV to recall the art of delighting senses as a lifestyle in the opulent Versailles. What strikes while smelling the eau de parfum is the mellow texture of the whole with spicy cinnamon, vanilla, tonka and clove coupled with patchouly so seamlessly blended that's hard to pick them one by one. So why not to give body to this sensation dusting with cocoa powder a drop of dark rhum infused with the same spices?  Add a cherry in syrup playing like the davana in the heart of the fragrance and few drops of rose essence and that's it! It's surprising how much people liked this one for the aftertaste releasing all its spicy sensuousness.

Take the catanese spring giving extraordinary evenings with temperatures we don't have till june in Milan. Take some tall narrow streets with baroque palaces and gaudy surfinias peeping out of the balconies. Take the cheerfulness of spots with outdoors tables. Take all these things and for a while even Catania can turn into Havana specially if you add the intense smell of exotic fruits. That's the reason why we decided to end with Maître Parfumeur et Gantier Fraîche Passiflore where Jean Laporte mixed a basket of juicy fruits: white peach, passion fruit, hints of ananas and red fruits and green and floral touches. This is not the kind of cocktail served at a chiringuito by a crowded beach though, we are in a luxury colonial villa surrounded by savage nature on a tropical island. To conjure up this images we offered a cocktail with ananas and passion fruit mixed with white rhum and fresh cream along the lines of the milky sandalwood in the base. Appetizing details, a wood strawberry and a pinch of chilli pepper recalling the lively pimento in the juice. Smelling Fraîche Passiflore is enought to relax and get back to memories of vacations like happened to a child sniffing the perfume. So fun he told me with disarming ingenuousness "Mango! This is the smell of Cambodia!". That's so thrilling! I bet Monsieur Laporte would be amazed to have instantly sent him to Cambodia with just a whiff of perfume!